Last fall, Laura Pritchett and I talked about the making of the characters in our books at the ZEE Jaipur Literature Festival @ Boulder. Highlights include writing about sex, telling the same story from multiple points of view, and the ultimate example of an unsympathetic character.

Around this time last year, I released my first book Islanders, which is a volume of poems on the history of Chinese exclusion at the Angel Island Immigration Station. I remember writing in my notebook: I don’t want my book to disappear.

Sometimes it’s hard to remember who I was a year ago. The first book changes everything and nothing. I still work at the same job, which has nothing to do with art. At the same time, I feel that I’m in a different place. I feel heard and that my voice matters.

Perhaps it was the way I grew up, but I have a hard time believing that people would stand up for me. But they did, in ways small and big: inviting me to read, buying copies of my book to give away, amplifying my book on social media, even sending it to media outlets on my behalf. I have a community that supports me.

For introverts with regular jobs like me, it’s difficult to take a month or two off to go on book tour. Instead, I read around Denver and took weekend trips to places that I wanted to visit. 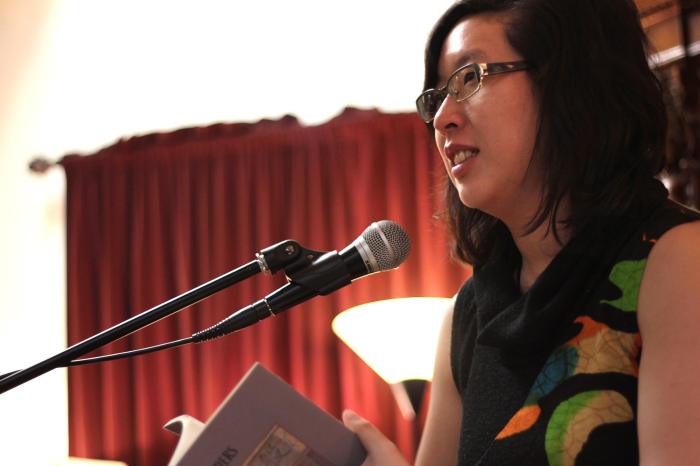 I started with the Denver Book Tour, five consecutive spring weekends of events in the Denver area. In hindsight, it was probably overkill, but as a seasoned writer, I sent more pitches than what I hoped to get.

My circumstances at the time made it difficult to travel until the fall. But I’ve also seen that writers whose books get a measure of attention engage their local literary community before venturing farther afield. Without that support, it’s difficult to get noticed elsewhere.

And I got to throw a book party for the friends, teachers, and colleagues who helped me through the writing of the book.

Fall was insane. I read at inaugural Denver Lit Crawl the night before I took an early morning flight to Tokyo, the first leg of a trip to Singapore for my brother’s wedding. I flew back just under two weeks later, closed on a house, moved everything, gave an interview to PBS News Hour, and flew to San Francisco to read at Litquake. I wanted to go for the opening party, but I was so exhausted that I crashed for twelve hours and woke up when a friend called me to say he could not make it to my reading.

Readings help sell books, but my favorite part is meeting people. In San Francisco I read with Solmaz Sharif, Emilia Phillips, Margaret Ross, and Tess Taylor, authors whose work I respect. A former coworker came down from Novato to hear me read and we caught up over beers later. My childhood best friend was traveling in the area and driving to the city from Yosemite that day; we met up for dinner in Oakland. I stayed with an old friend from college in Union City and we stayed up all night catching up over wine.

I also went to the San Francisco Public Library to work on research for a new project and got talking to the special collections librarian. I said that I was in town to read at Litquake and she said, “Do we have your book?” She looked up their records and when she found they didn’t, she took down my information and sent it on to the literature department. Last I checked, they have five copies of my book.

I was tempted to down a bottle of scotch on the night of the November election. A week later, I went on Colorado Public Radio to talk about my book. The timing was fortuitous; we had scheduled it in October. I haven’t listened to the interview again – I don’t like to hear myself speak – but I think there was a barely suppressed rage in my voice. We didn’t talk about the election, but how else would a listener frame a story on immigration and exclusion in November 2016?

I remember Ryan Warner’s final question was, “Would you recommend visiting Angel Island?”

And I said, “Yes. It’s an important story, especially in this moment. And it’s a beautiful place.”

The day after the interview, I flew to Portland for a writing workshop with Lidia Yuknavitch and to give a reading at Domi Shoemaker’s Burnt Tongue series. I’m not sure what it was, but the interview took everything out of me. I landed in Portland shortly after lunch and crashed until dinner time.

Everyone was still shaken by the election results.

At her workshops, Lidia gives everyone a copy of a book of her choice. That weekend, she gave out my book.

I’m not sure if I offered words of hope, but I think my story was one of the things people needed to hear.

I had thought that my book promotion would, for the most part, end with the Colorado Public Radio interview and the Portland reading. When I got back from Portland, I received an e-mail from a journalist who wanted to interview me for her website on literature and current affairs. I said yes and a week later, she wrote back to say that she wanted to pitch a bigger outlet.

She pitched The New Yorker.

As the saying goes, debut poets shouldn’t expect to appear in The New Yorker.

For about a year after I signed the contract, I was stuck. I wasn’t writing, and whatever little I did write felt like crap. Lidia’s workshop reopened something in me. I understood why I needed to write the story that had been floating in my mind for a while. I came back to Denver with fire and fury. I didn’t travel in the winter. Saturdays I went to the mountains to ski. I made a lot of progress on the project.

I appeared again in the spring. First to Ridgway, at the invite of my friend Kierstin Bridger, who runs the Open Bard Poetry Series in the valley below the snowy peaks of Telluride. Ridgway is a town of just under 1,000 and about 40 people turned up for my reading, including Jennifer Hancock, who drove 90 minutes each way from Grand Junction on a Thursday night.

I spent the rest of the weekend skiing in Telluride. 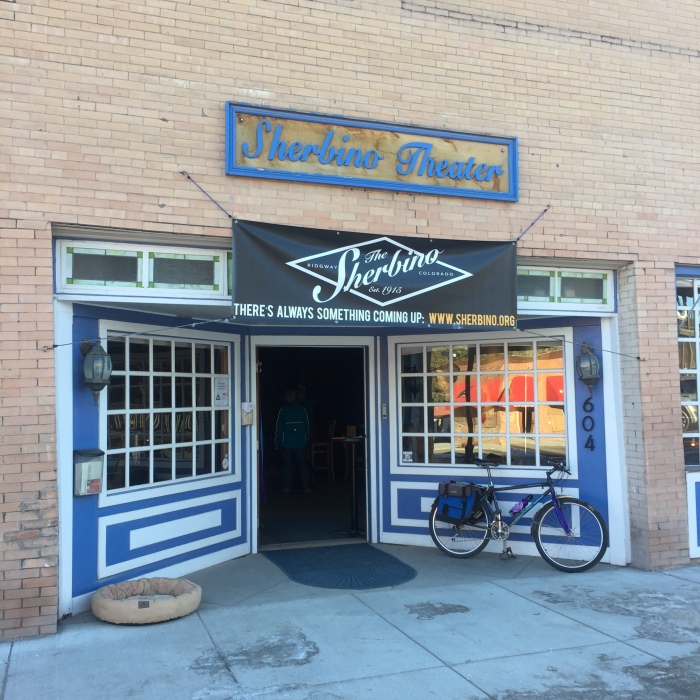 I also read at the Clocktower Cabaret in Denver and the SoCo Reading Series in Pueblo. When I published the book, I didn’t quite expect to perform at a cabaret. 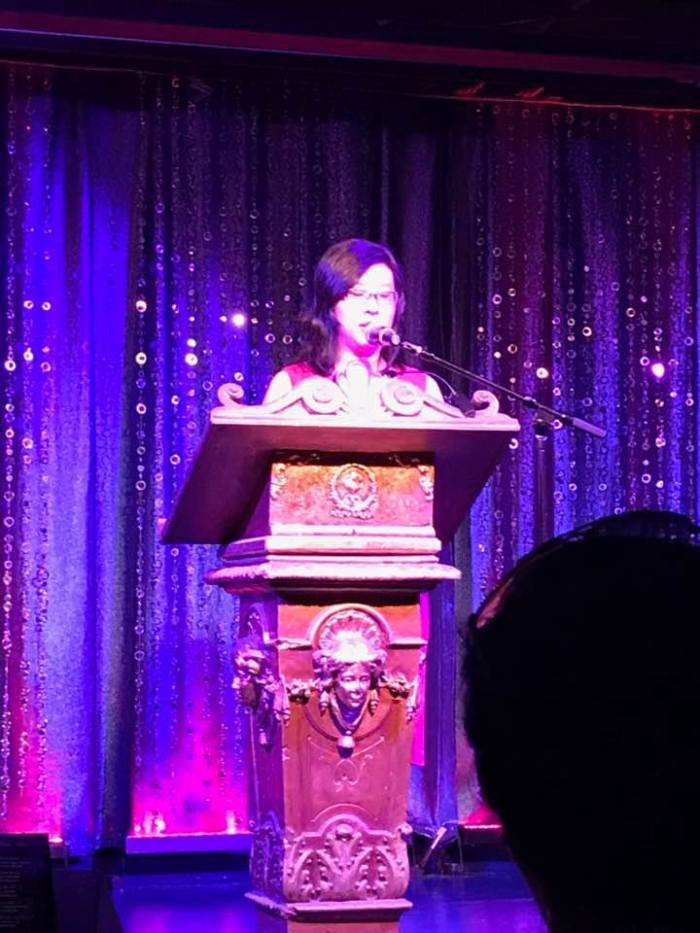 This past weekend I read at the New Orleans Poetry Festival. I had wanted to visit New Orleans for a while and this year I decided to make it happen. Met up with Louisiana poet Vincent Cellucci, friend of another old friend from college, over oysters and beer. Went kayaking on the Bayou St. John, stumbled on a crawfish boil at a dive bar, and drank a few too many Hurricanes and Sazarecs on Bourbon and Frenchmen streets.

I thought New Orleans would be the end of my book tour, but a few minutes after my plane landed in Denver, I received an invitation to read at Angel Island.

Last month, I read from Islanders at Domi Shoemaker’s Burnt Tongue in Portland, OR. Adam Strong made this beautiful video.

Sign up for updates on new releases and events.

Disclosure: I am an affiliate of Bookshop.